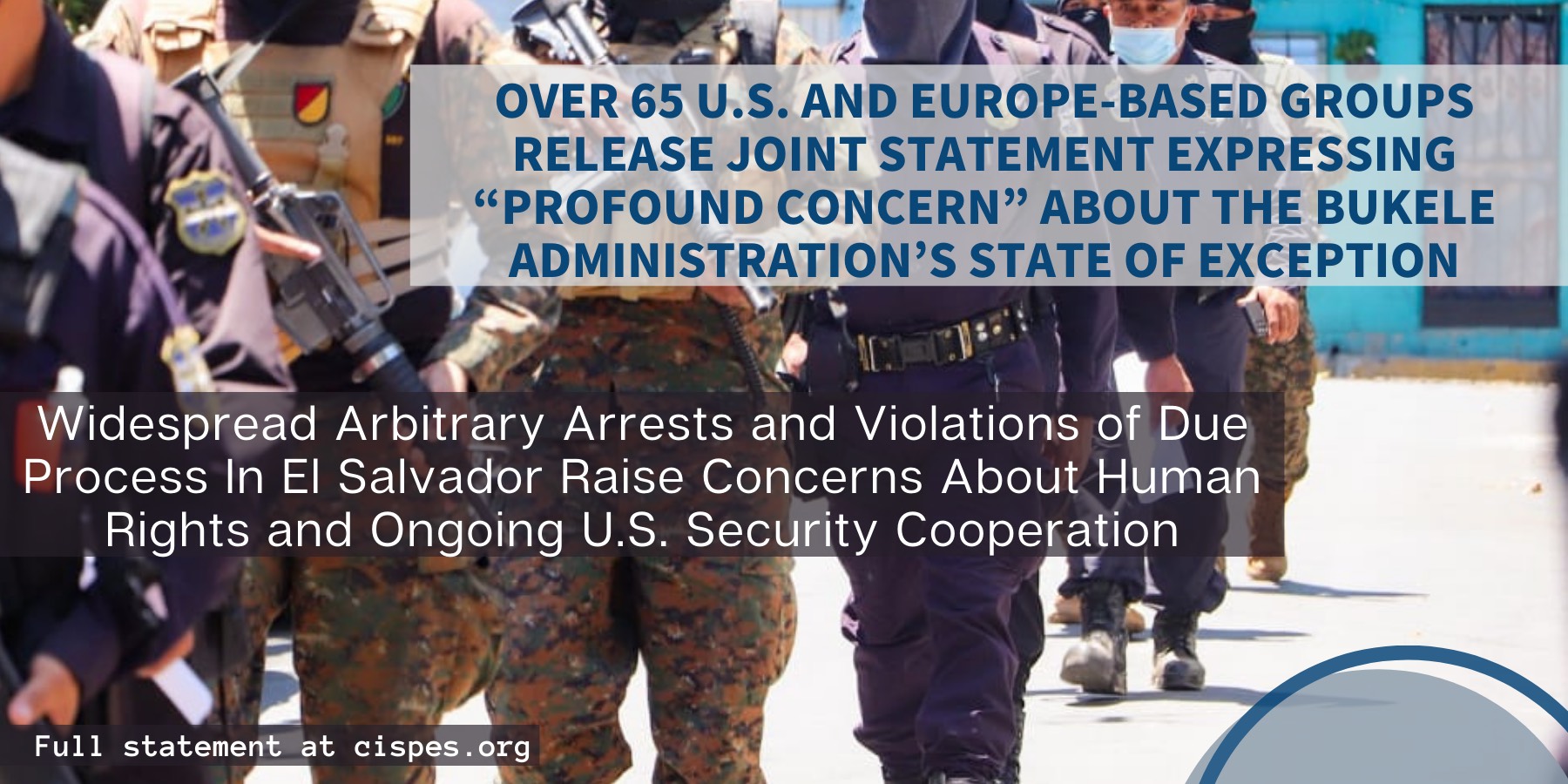 Over 12,000 people have been arrested in El Salvador since the Bukele administration declared a State of Exception on March 27th. In the name of cracking down on gangs following a wave of deadly violence, the State of Exception suspended several constitutional rights, including due process and freedom of assembly, and enabled the Salvadoran military and police to make arbitrary arrests, particularly targeting youth from marginalized communities. Those arrested can be held for 15 days without charges or even seeing a judge and can be held for years without a trial. The Legislative Assembly also passed reforms so that journalists and others can be jailed for up to 15 years for publishing information that “alludes” to gangs or is presumed to have originated from them – a clear act of press censorship.

Denver Justice and Peace Committee joined the Committee in Solidarity with the People of El Salvador (CISPES) and sixty-five other organizations in a joint statement raising concern about the widespread arbitrary arrests, violations of due process, and human rights violations taking place in El Salvador. The statement also addresses the U.S. role in promoting “militarized, punitive policing and mass incarceration” and financing much of the military and police apparatus currently carrying out arbitrary arrests.

Take action! Ask your Congressional Representative to support a letter calling for a suspension of U.S. military and police “aid” to El Salvador, as well as Guatemala and Honduras, by clicking here.

Washington, DC, April 19, 2022: Over 65 U.S.-based human rights, faith, immigrant rights, diaspora and international solidarity organizations released a joint statement expressing “profound concern” about the Bukele administration’s mass arrests in El Salvador and reports of human rights violations at the hands of state security forces. Since early April, over 12,000 people, predominantly from marginalized communities, have been arrested without warrants in response to a tragic spike in homicides; many arrests have been denounced by witnesses and family members as arbitrary in nature.

As the 15-day administrative period for which people can be held without charges under a 30-day State of Exception comes to close for many, the groups are calling on the Salvadoran government to reinstate due process, lest a door be opened to “profound and lasting injustice.”

The groups also expressed concern that “sweeping legal reforms, including the elimination of a two-year limit on provisional detention” will exacerbate an “already widespread problem of prolonged detention.”

The groups also point to decades of U.S. security cooperation promoting “militarized, punitive policing” as part of the problem, and worry that more Salvadorans will be forced to migrate out of fear of wrongful incarceration.

“For the past two decades, the U.S. has been a major partner in building up the Salvadoran security apparatus that the government is now taking to extreme and inhumane ends. So whether President Bukele is going after gang members, as he claims, or uses expanded state powers to target political opponents, the U.S. also bears responsibility for the state’s ability to carry out violence against the population,” said Alexis Stoumbelis, Executive Director of the Committee in Solidarity with the People of El Salvador (CISPES).

“The U.S. must immediately take steps to address its complicity in the human rights abuses, violations of due process, and political persecution in El Salvador by immediately ending all U.S. military and police assistance to El Salvador, including U.S. promotion of militarized policing and mass incarceration,” said Brigitte Gynther of School of the Americas Watch.

“Working-class families in marginalized neighborhoods already have to live in constant fear of the gangs. Now, they are disproportionately susceptible to arbitrary arrests, prolonged detention, and a politicized justice system. What will be the response to this worsening situation? Many Salvadorans will naturally leave their homes or even the country to avoid becoming a victim of a lawless government, resulting in more mass displacement from El Salvador,” said Arturo Viscarra, International Program Manager at Coalition for Humane Immigration Reform (CHIRLA)

We stand united against this attack on civil liberties and the ongoing movement for Black Lives.