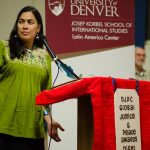 Born in Nicaragua and grew up in both Nicaragua and Guatemala, from a young age, she has been committed to political action on behalf of the excluded by serving the poor and underprivileged. Her own mixed background – Nicaraguan Miskito Indian and white North American – has allowed her to commit to the long-term struggle for social justice, challenging unfair economic and criminal systems that affect the immigrant communities. She also has a keen understanding of the intersecting patterns of exclusion along dimensions of race, ethnicity, language, gender, immigration-status, and class. She and her partner Aaron and daughters Luna Serena and Sol Lilia live in Denver. 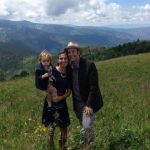 Elliot Williams, is a Senior Associate at Siegel Public Affairs where he advocates on issues ranging from immigrant rights and environmental conservation to reproductive justice and educational equity. Elliot’s work in the nonprofit world has been broad. It includes community development in Chicago, Southern Mexico and Guatemala, promoting educational opportunities and economic empowerment. Additionally, Elliot did advocacy research and writing while living Bolivia and served as a caseworker for elderly and disabled residents of Wisconsin. Elliot got involved with DJPC shortly after he moved to Denver from Chiapas, Mexico in 2013. The organization helped him stay connected to the region. He has been a board member since 2014 and he distinguishes DJPC as a critical non-coastal voice that recognizes the impacts of US policy on nations and peoples throughout the hemisphere. His purpose as part of the board is to advocate for just and thoughtful international policy and making sure that DJPC is the most effective organization it can be despite the constraints. 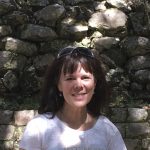 Lynn Holland, Lynn Holland has been a board member since 2017. As a student, she spent a summer in Nicaragua and toured a Salvadoran refugee camp while the contra war was going on in the 1980s. In more recent years, she has traveled with DJPC human rights delegations to Honduras, Peru, and Chiapas, Mexico to learn about efforts to combat the adverse impacts of metal mining on human health, community life, and the natural environment. As part of the board, Lynn has helped coordinate the Chiapas human rights delegation, assisted with fundraising and written frequently about the impacts of mining in rural areas and the dangers of authoritarian rule in Latin America. She teaches international studies at the University of Denver and serves as an expert witness in asylum cases. 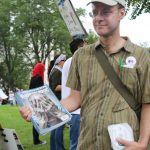 Preston Enright, was born in Philadelphia, where he attended a Quaker elementary school, and lived subsequently in Omaha and Fort Collins, where he attended Colorado State University. During a year off, he worked as landscaper and met a veteran of the Salvadoran military who told Preston of the massacres and human rights violations of the US-backed regime. He subsequently worked with the DJPC in Latin America and went to Nicaragua on a cultural exchange with a Boulder-based solidarity group, “Los Pipitos.” He has continued travel in Latin America, and he focus on grassroots media, including a YouTube channel called The Public Mind of Denver, and a program of leftist lectures on Denver’s community access television station, working with David Barsamian of Alternative Radio. Preston believes that being part of the DJPC offers an opportunity to learn about human rights and foreign policy issues in Latin America, and to work with others to cultivate understanding and support other peace and justice efforts. He has been a board member since 2016. He actively represents DJPC at community fairs and performs a range of activities including outreach and fundraising.  Social media and tabling are special interests of his. For fun, Preston rides his bike, practices yoga and cloud watching and hands out copies of Yes! Magazine. 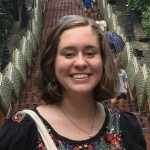 Amy Czulada, is originally from Philadelphia, PA, where her family, including her beloved niece and two nephews reside. Her interest in Latin America began in high school while studying Spanish, but it grew after traveling in Mexico and Central America in college. She lived and worked at the US/Mexico border for two years, focusing on higher education and in immigrants’ rights including casework for survivors of violent crimes. Amy joined DJPC board in the spring of 2017 and she is the Board Treasurer.  She believes it is important to serve as a normative force against US imperialism in the world. Through action and advocacy related to human and environmental rights, it can be demonstrated to the broader global community that the resistance movement is strong and continuing to grow. As part of DJPC, Amy manages the newsletter, helps with grant writing, and pays and manages the federal, local and state taxes for the organization. Amy has been a researcher for a labor union in New York City since early 2018. Before, she was heavily involved in research and activism around wage theft in the greater Denver area, she was also part of with the Sanctuary movement in Denver. She graduated with her master’s degree in International Studies from the Josef Korbel School at the University of Denver and has a bachelor’s degree English and Spanish from La Salle University, Philadelphia. Amy currently lives in Queens, NY, she loves hiking and playing music. 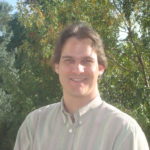 Rafael Loris, is an Associate Professor of Latin American History  and Politics at the University of Denver. He holds a PhD. in Latin American History from Emory University, and MA in International Studies from the University of Brasilia, and a BA in Social Sciences from the Federal University of Rio Grande do Sul, in Brazil. He is an affiliated faculty at the Latin American Center at the Josef Korbel School of International Studies. Prior to moving to Denver, he was also a professor of International Relations and Latin American issues in Brazil, where he is from. Rafael joined the DJPC board in December 2019 after being involved in a more informal basis for 3 years.  As part of the board, Rafael has tried to contribute both to the education and advocacy work done by DJPC, especially though his academic and social media connections and to the planning and advisory role that the board plays in the actual activities of the Committee. Rafael thinks DJPC has played, over the years, a major role in bringing awareness about issues related to social (in)justice in Latin America, especially the impacts of misled actions of US-based official and private actors to the Denver community. In doing so, DJPC has been a voice for those who were not so visible in the public arena. These efforts are directly in tune why how he conceives his work as an academic who also seeks to act as a public intellectual in advocating for similar issues. Rafael currently also serves in the board of the US National Network for Democracy in Brazil, a US-based, largely academic-led, organization that monitors the state of democracy in Brazil created after the election of Jair Bolsonaro to the presidency of that country. Rafael lives in Centennial with his family. He has two active kids who keep him busy in all seasons of the year. 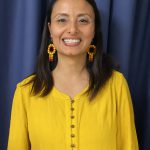 Natasha Kerr has worked on social and economic justice issues relating to migrant farm workers, refugee, & immigrant rights, environmental justice, nutrition and homelessness for a variety of statewide, national, and international organizations.  She is a long-time supporter of DJPC and joined the board in 2019. Her recent work on the board involved coordinating the 2019 Build for Peace volunteer project. Natasha supports DJPC’s efforts creating greater awareness, political action, and solidarity across borders. She is inspired by the community activists in Latin America struggling for land, water, and self-determination and believes people in the U.S. have a great deal to learn from communities in resistance. She holds a M.A. in International Development with a concentration in Environmental Studies. Natasha graduated from the Circle of Latina Leadership in 2007. She currently lives in Denver and enjoys the outdoors, cultural events, concerts, traveling and everything involving DJPC. 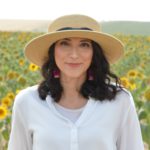 Adrina Shaikh joined the DJPC board in 2022. She first supported DJPC in 2012-2013 as a Sustainable Development and Mining Intern, elevating Indigenous Peruvians’ voices in their journey to uphold environmental justice and human rights. Before her internship with DJPC, she graduated from the University of Denver with an M.A. in International Development. She also holds a Bachelor of Science in Geology and Anthropology. She has several years of experience as a Research Associate crafting narratives for clients who were seeking asylum in the U.S. Currently, Adrina works as a Tribal Relations Specialist for the Indigenous Engagement program at AECOM. She is passionate about issues that affect Indigenous Peoples and local communities and in applying a human rights-based approach to environmental projects, conservation and community engagement. Uplifting voices has been a common thread throughout her career and she hopes to continue this work as a board member for the Denver Justice and Peace Committee.