Informative events features interactive and stimulating discussions among people who are concerned about peace and justice in the world today. Formerly called Salon Discussion Series, that began with an exploration of the framework that Transitional Justice affords societies moving forward from a history of violence and genocide to a future of justice.

Vea abajo en Español
You are invited to a teach-in on legislative activism.
Thursday, May 6th at 6:00 pm.
Professor Dana Frank will share with us the history behind three bills on Honduras and how to advocate for them.
You will also hear from Hondurans living in Colorado in the Lucha para Honduras Libre organization.
This event will be followed by an action in support of the three bills!
Register HERE 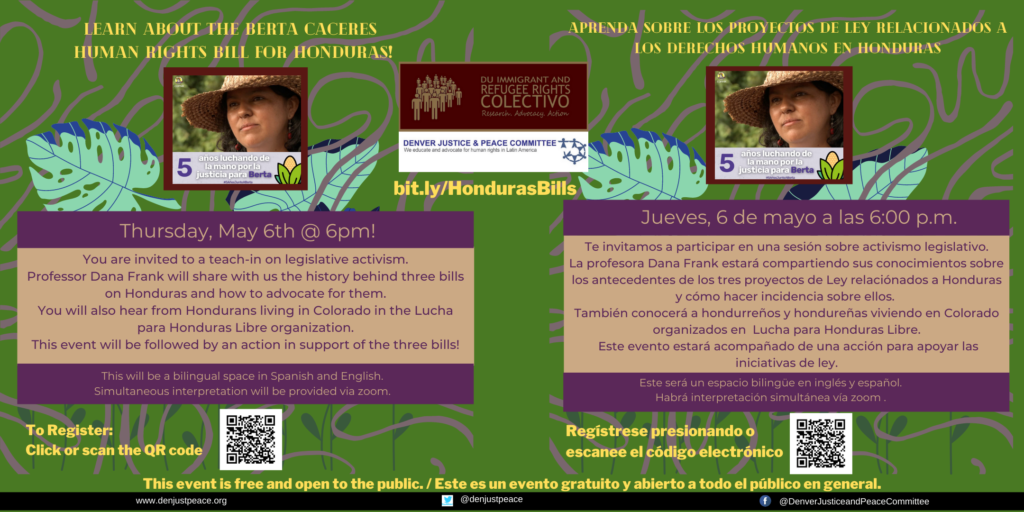 Thursday, April 15 2021: “Asylum-Seekers and Migration at the U.S.-Mexico Border. A conversation with Kathy Bougher”

This was a conversation based on Kathy’s recent visit to the border. She addressed “metering” the Migrant Protection Protocol – MPP (“Remain in Mexico”) and Title 42. 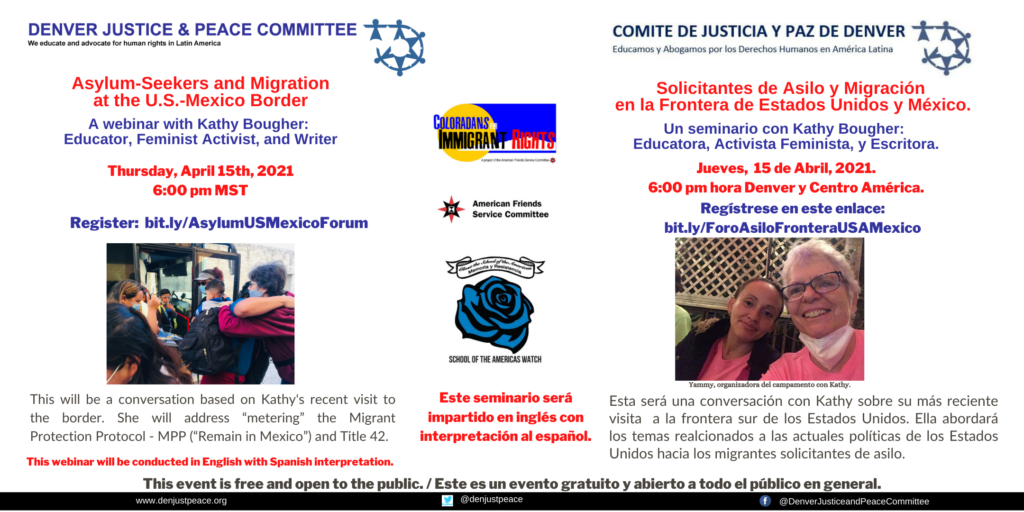 Kathy Bougher is a Denver-based educator, feminist activist, and independent writer. She has witnessed diverse aspects of the U.S.-Mexico border since the early 2000s. Since 2014 she has made several trips to the Texas-Mexico border during the time of waves of asylum-seeking families and unaccompanied minors, the initiation of the “metering” and the Migrant Protection Protocol (“Remain in Mexico”) policies of the U.S. government, and most recently at the point of the recent wind-down of MPP. She has also traveled extensively to migrant shelters throughout Mexico and the Northern Triangle of Central America to interview Central American women and LGBTQI+ migrants and asylum seekers. Since 1992 she has collaborated with feminist organizations in El Salvador on numerous issues, including migration and a research project on Salvadoran women and migration. In Denver she is a member of Coloradans for Immigrant Rights, a project of the AFSC. 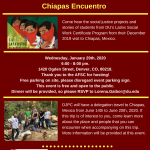 This forum addressed social justice projects and stories of students from DU’s Latinx Social Work Certificate Program from their December 2019 visit to Chiapas, Mexico.
DJPC will have a delegation travel to Chiapas, Mexico from June 14th to June 20th, 2020. If this trip is of interest to you, come learn more about the place and people that you can encounter when accompanying on this trip. More information will be provided at this event. 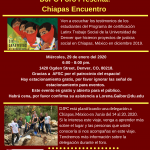 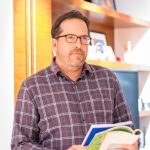 Todd Miller has traveled from Honduras to the Philippines to Paris to the U.S. Mexico borderlands to connect the dots between the changing climate, displacement, and a world of more and more border enforcement. He will share stories from those journeys, discuss how those dynamics are shaping life in the 21st century, and explore alternatives.

Thursday, May 2nd 2019: Waking up to the Suffering and Oppression of Others. A conversation with Father Roy Bourgeois. 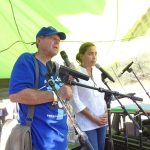 Father Roy Bourgeois earned a BA in Geology before serving 4 years in the military, earning a purple heart in Vietnam. He subsequently joined the Catholic Church and served 40 years as a priest, including serving the poor in Bolivia and El Salvador. These experiences led him to found the School of the Americas Watch (SOAW), an organization seeking to close the what is now known as the Western Hemisphere Institute for Security Cooperation (WHINSEC) at Fort Benning, GA.

Father Roy has served a total of 4 years in prison for non-violent protest and he and SOAW were nominated for the Nobel Peace prize in 2010. In 2012, Father Roy was expelled from the priesthood for his public support to the ordination of women priests.
Few have accomplished and sacrificed as much to address suffering and oppression.In 1994, Father Roy received our Global Justice & Peace Award and look forward to hearing his experiences about how we can stand in solidarity with the people of Latin
America.

A conversation with Brazilian specialists who discussed recent events taking place in Latin America’s largest country. A nation that until recently was seen as an emerging economic powerhouse and democracy; now living one of its worst crisis lead by its authoritarian regime. 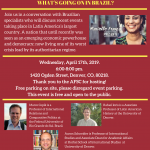 Marco Cepik is a Professor of International Relations and Comparative Politics at the Federal University of Rio Grande do Sul. Brazil.

Christine Eber and Bill Jungels shared some of their insights about responses to top-down economic development from their work in the highlands of Chiapas, with a focus on the township of San Pedro Chenalhó. Christine will focus on Maya weaving cooperatives as a means women have been using to gain greater economic autonomy and lift up their families and communities. Bill will focus on the struggle against government plans to build a “Sustainable Rural City” in Chenalhó as an example of successful resistance following the Zapatista uprising. 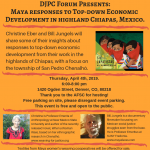 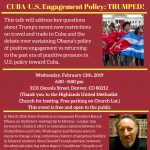 In March 2016, Peter Kornbluh accompanied President Barack Obama on his history-making trip to Havana–a major step forward in a historic effort to normalize relations between the United States and Cuba. Washington and Havana were on course to change a long contentious history of perpetual hostility in bilateral relations. Since Donald Trump’s election, however, his administration has taken steps to “recalibrate” the policy of peaceful coexistence and close the door on better relations in the future. This presentation will address key questions about Trump’s recent new restrictions on travel and trade to Cuba and the debate over sustaining Obama’s policy of positive engagement vs returning to the past era of punitive pressure in U.S. policy toward Cuba. 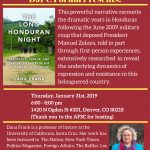 This powerful narrative recounts the dramatic years in Honduras following the June 2009 military coup that deposed President Manuel Zelaya. Dana Frank is a professor of history at the University of California, Santa Cruz.

To watch the Forum here: https://www.youtube.com/watch?v=L7yzS-V7bso 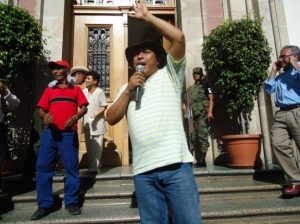 The Association for the Integral Development of Victims of the Violence in Verapaces, Maya Achí (ADIVIMA) has been at the forefront of representing the families of the Maya Achí peoples, survivors of genocide and grave violations of human rights during the civil war. To repair the fabric of society, ADIVIMA promotes actions to ensure the Guatemalan State guarantees access to justice and reparations to the families of survivors. Juan de Dios Garcia talks about their work.

To watch the presentation go to: https://www.youtube.com/watch?v=HD7TgmZ27G4

October 1st 2015: “Struggles for Justice: From Guatemala to Ayotzinapa” 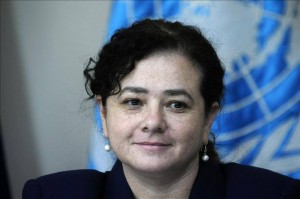 As Guatemala´s fist female Attorney General, Dr. Paz y Paz Bailey prosecuted organized criminals and perpetrators of mass human rights abuses despite threats to her own safety. She was a 2013 nominee for the Nobel Peace Prize.

To watch the talk go to: https://www.youtube.com/watch?v=SJlw7cJXuw0&feature=youtu.be

In 2003, DJPC introduced Global Solutions to Violence (GSTV) a program  to teach students in local high schools and youth programs about issues related to peacemaking, nonviolence and globalization. The program curriculum explores conflict, thus creating the potential for a paradigm shift away from physical and economic violence. While DJPC no longer directly offers GSTV, we want to make the curriculum available to as many teachers and students as possible. Lesson plans can be accessed online and include printer friendly versions. Resources are presented in each lesson and an additional resource list is also offered. The lessons are available at no charge, however, we do hope that you will make a donation for the value received. Donations may be made to “DJPC Education Fund” and will be gratefully appreciated.