Our annual Awards Night, held in the autumn, honors an internationally known guest who speaker on Latin American human rights issues. This celebration honors individuals and/or groups for their outstanding work in promoting justice and peace as well as a commitment to the mission of DJPC through the distribution of our Global Justice and Peace Award and our John Proctor Award, which goes to a dedicated DJPC volunteer .

This is a time when we celebrate what the DJPC has achieved over the previous year and honor the work of others outside of the organization, as well as an opportunity to gather and build community. 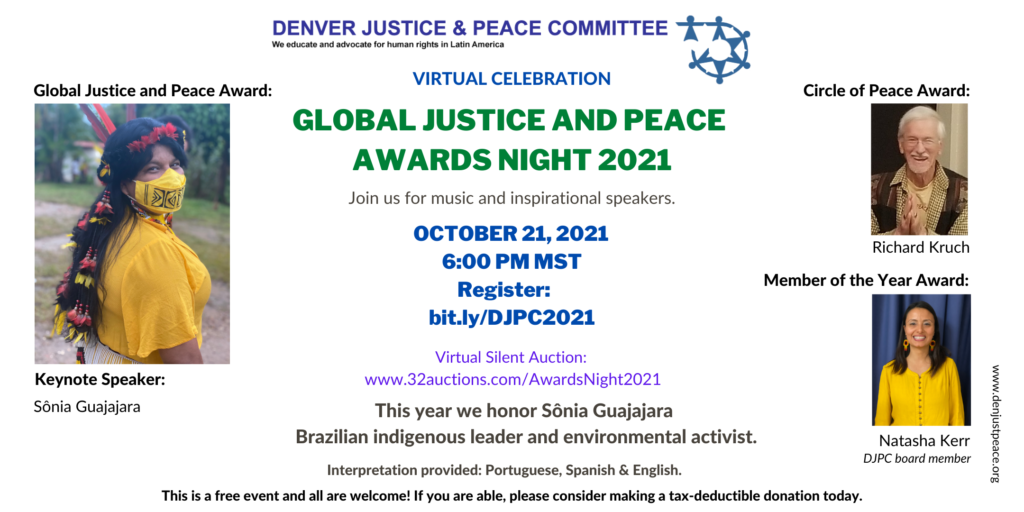 Join us on Thursday, October 21 at 6:00 p.m, for our Annual Awards Night. This year we will continue celebrating in a virtual platform. During the event, we will present our annual Global Justice and Peace Award to Sônia Guajajara, defender of the indigenous peoples of Brazil, born in the indigenous land Arariboia, of the Guajajara people, Sônia has been in the struggle and resistance for the rights of the original peoples for a long time.

We will also recognize two longtime supporters of DJPC, Richard “Kruch” and Natasha Kerr for their activism and commitment to social justice.

Join us for an evening of music and inspirational speakers.

Visit our virtual auction featuring the labor of many local artisans, and gift certificates from many local businesses. Don’t wait to long, start your bids here! 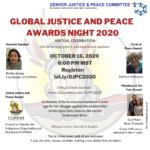 On October 16th 2020 we honored the Council of Popular and Indigenous Organizations of Honduras (COPINH) founded by Berta Cáceres, who was murder, in 2016, for her struggle against the construction of Agua Zarca Dam on the sacred Gualcarque River. 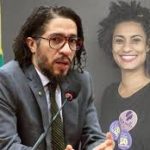 On October 12th 2019 we honored congressperson Jean Myllys de Matos Santos. Wyllys became a leader of human rights and gay rights struggles in Brazil through an unusual path. He won the Brazilian version of Big Brother, and he turned that victory into a political statement for LGBTQ rights. In Congress, he became a nemesis to Jair Bolsonaro, the current fascist president of Brazil, and following the 2018 elections Wyllys suffered death threats. He had been close to another gay politician, Marielle Franco of the Rio de Janeiro city council, who had been assassinated earlier that year. As a result of the death threats, Wyllys resigned his position and entered exile, refusing to serve during the government of Bolsonaro. 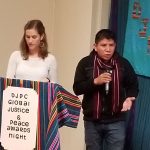 José Gómez spoked about their struggle to protect land and water, cultivate indigenous leadership, and build community power in the face of harmful corporate and state-led megadevelopment.

Read more about ACODET in NISGUA’s Spring 2018 Report “Water is Life: How to Stop a Dam through Indigenous Resistance.” (Also available in Spanish.)

2017: National Roundtable Against Metallic Mining (Mesa Nacional Frente a la Minería Metálica), a campesino-led movement in El Salvador. In March 2017, the Roundtable won a historic legislative victory by securing a prohibition against all metals mining in perpetuity. For a land-poor country with vulnerable water sources and significant rural population that would be displaced by mining, this was an unexpected and unprecedented accomplishment. To relate the story of the movement and the details of the legislation, our guest speaker was Ms. Vidalina Morales leader in the National Roundtable.

2016: Otros Mundos AC Chiapas for its commitment to the search for alternatives to the social, economic, political and environmental crisis that we face in the current system of capitalist domination. In the struggle for the defense of the land, territories, and alternative strategies of development. They work to strengthen the resistance and articulation of the Mesoamerican movement of those affected by dams and mining. An example of their continued effort is their unwavering commitment to the struggle of Berta Caceres and COPINH in Honduras. To learn more about Otros Mundos AC Chiapas click here

2015: Aviva Chomsky Professor of History and Coordinator of Latin American, Latino, and Caribbean Studies at Salem State University, Massachusetts.Author and Activist on many Latin American issues, including mining and immigration.

2013: The Network in Solidarity with the People of Guatemala – NISGUA, links people in the U.S. and Guatemala in the grassroots global struggle for justice, human dignity, and respect for the Earth. Formed at the height of Guatemala’s war in 1981 NISGUA’s network today is comprised of thousands of people across the U.S. who to demand justice for genocidal crimes of the past, push to change current U.S. policies, challenge corporate-led development in Guatemala, and advocate for grassroots alternatives.

Thank you for visiting this page: More updates coming soon!