By Alice Garcia, summer intern at the DJPC 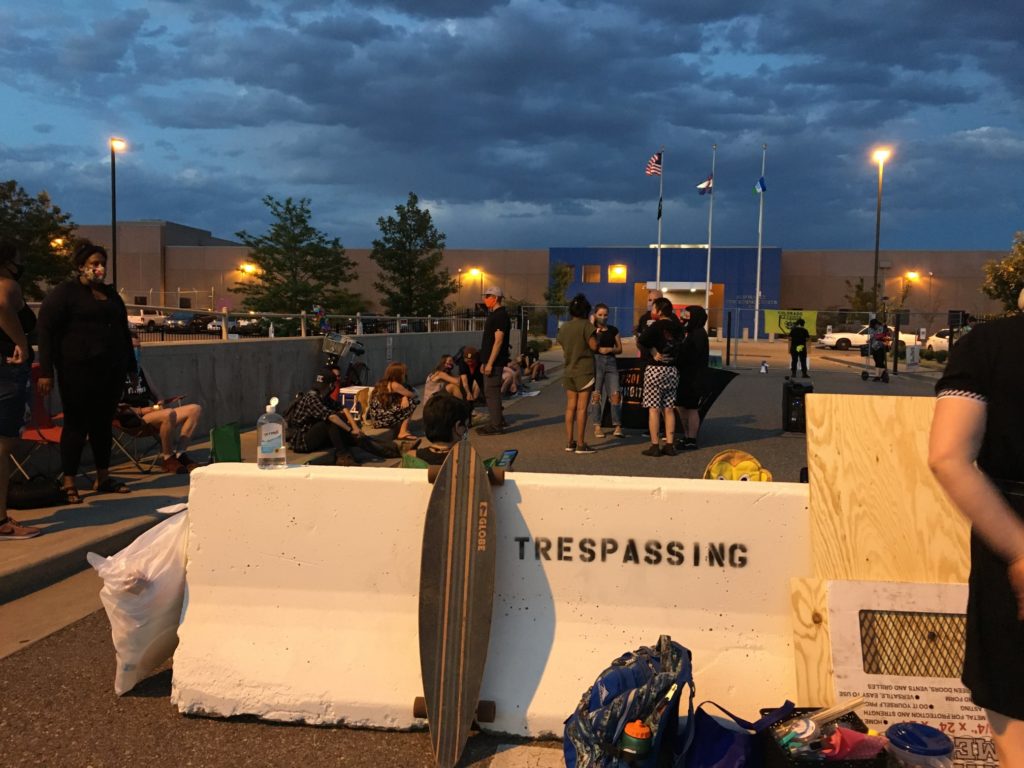 “It is no more or less than a concentration camp. It is a stain on our moral consciousness as a society. [Detention centers] need to be shut down.” — Human rights activist Isa Villalon

Protestors have been camping outside of ICE detention center in Aurora to call for the immediate release of all detainees amidst the deadly outbreak of COVID-19. Since March 30, twenty-one detainees, two ICE employees, and ten GEO employees have been confirmed to be infected by COVID-19. The Aurora ICE Processing Center is currently on the list of sites of outbreaks occurring in Colorado with an active investigation since May 30th, and Rep. Jason Crow’s office has been requesting data from ICE.

While the overall goal is to close the detention center down and release all detainees, protestors are asking for every detainee to be screened for COVID and to release people who are immunocompromised and/or elderly. Only two facilities in the U.S. are screening detainees for COVID, and according to detainees, only a few people were screened. ICE detention centers do not have the capacity to deal with a COVID outbreak.

The majority of the people detained come from Colorado, Uthan, and Wyoming, but there are still others from across the nation being transferred. This poses a risk of exposure for detainees and other members of the community.

Even as the US fails to contain the virus in detention centers, we export the sickness to Guatemala. Guatemala originally closed its borders to deportations, due to COVID-19, but reopening has spread the virus even to distant rural Guatemalan towns.

Isa Villalon of Aurora, CO was a human rights accompanier for Network in Solidarity with the People of Guatemala (NISGUA) in Guatemala for 7 months. As a human rights accompanier, she helps prevent violence during protests and if violence were to occur, takes on the role of alerting the international community. Accompaniers also provide support to individuals or organizations involved in legal cases. During her time there she was able to see how the United States-Guatemala Asylum Cooperative Agreement was harming the community and the asylum seekers being deported to Guatemala. Non-Guatemalan people are being dropped off in rural areas of the country without giving them the information and resources they need to return to their home country, or the opportunity to apply for asylum in Guatemala. They are also being discriminated against for being immigrants, in a country already expelling its citizens due to violence and government corruption.

Due to the COVID-19 outbreak Isa had to return home, but she immediately connected her work in Guatemala to the struggles against detention centers in the US. She joined the encampment outside the Aurora ICE processing center to demand freedom for all detainees on account of COVID-19.

Kesha Davalos-Grijalva, whose husband is detained in the Aurora detention center, has been camped in front of the detention center since May 23 when the protest began. Kesha and other protestors take turns monitoring the comings and goings at the facility in an attempt at gaining information about the detainees. Neither ICE nor GEO has been willing to share this information.

As the protestors have learned, Tuesdays are deportation days. On Tuesday, June 30, Kesha, who was keeping watch that day, heard from her husband’s lawyer that he was unable to reach her husband. Right away, Kesha called the facility and was told by a GEO officer that her husband was no longer there. Soon after, Kesha caught sight of a group of detainees as they were boarded onto buses to be deported. She and the other protestors then rushed to the airport in an attempt to intervene. Once at the airport, they found that the police had blocked off the road, even though it was public property, and were refusing to let anyone pass through. A journalist at the site was also prevented from passing through. Afterward, Kesha contacted the lawyer and was told that her husband had not been deported and was still at the facility.

These measures taken by ICE are misguided and abusive for a number of reasons. In the first place, ICE attempted to deport Kesha’s husband in the middle of his court case. At the time, the facility did not inform the family of his potential deportation and no legal documents were signed to authorize it. In the end, Kesha’s husband was not deported simply because he refused to leave the facility without talking to his lawyer. Kesha’s family believes that he has been targeted by GEO officers because he has regularly relayed what is going on inside the detention center to his family and supporters on the outside.

In addition, we have to question the use of on-duty police officers acting as security for a private company. Nor should they have been closing off public property to journalists and peaceful protestors. Let us also consider the psychological toll these events have taken on Kesha and her family. Blocking her husband’s ability to communicate with his family and lawyer placed her in a state of bewilderment and fear for his safety.

Isa Villalon reminds us that these abusive actions are going on in detention centers throughout the country and constitute violations of fundamental human rights. Most detainees are incarcerated for years before they are deported, when the majority have done nothing wrong other than attempting to flee violence, hardship, and oppression in their countries. As she puts it, “It is no more or less than a concentration camp. It is a stain on our moral consciousness as a society. [Detention centers] need to be shut down.”

*This article was written early in the month of August. The encampment has since been shut down at the Detention Center.

In the Era of Trump, We Need the Human Rights Movement More Than Ever