By Lorena Gaibor, Board member

Casa de Paz, just a few miles from the immigrant detention center in Aurora, provides housing, meals, visits and emotional support, access to phones and computers, and transportation to family members separated from each other during detention. These services are provided free of charge thanks to the volunteer services provided by people like DJPC board member Lorena Gaibor. Here she describes her work with Casa de Paz.

I want to share two encounters that I’ve had with guests at Casa de Paz to illustrate how meaningful and necessary the hospitality of Casa is for all who are touched by this work. While immigrants are often separated from their children and other family members, Casa volunteers mobilize to help reunite parents in detention here in Colorado with their kids. We carry out fundraising efforts along with our usual work of picking up folks released from the GEO detention center and providing support for them.

One night, I met a mother from Guatemala who came to the U.S. seeking asylum as a survivor of domestic violence. She had been held in detention for about two months after being separated at the border from her 7-year-old daughter. Maria (a pseudonym) was deeply concerned about reuniting with her daughter as soon as possible. Thankfully, I was able to put her in touch with AFSC folks in Boston where she flew after leaving Casa. About two weeks later, Casa de Paz and AFSC were able to assist in reuniting with her daughter.

More recently, a guest who stopped me in my tracks was a man from South Sudan. This guest was visibly traumatized not only by the violence he had experienced in his country but also by being held in detention for over two years, despite the fact that he was a legal refugee. This man’s story broke my heart and left me feeling utterly helpless. While I sat with other guests at dinner, he told us that he did not want to join us. Yet, he drew closer to the table and shared his story with us through tears. He had gotten into a scuffle with police one night while he had been drinking and that was what had landed him in detention. The only reason he was released, he said, was because our government cannot send him back to his country. Now out of detention, he wants to return to his own country because he does not want to live in constant fear of being thrown into detention at the slightest infraction. While he has no family or community here, he does have caring folks from Casa de Paz and Rocky Mountain Immigrant Advocacy Network (RMIAN) who are now helping him resettle in Denver.

This refugee’s story reminded me of how our jails, prisons, and detention centers are crowded with people suffering with mental illness. Instead of receiving the care they need in their communities, they languish in prisons without adequate mental health service.

Injustices in Latin America and elsewhere are often tied to U.S. policies and corporate greed that contribute to the hardship and violence causing so many to seek asylum here. What is our responsibility as American consumers who benefit from the very policies and greed that are causing so much disruption and suffering in Latin America and elsewhere in the world? How can we learn about these struggles so as to raise our consciousness and work to create a better world? These are the questions I ask myself and hope to find solutions to by volunteering with Casa de Paz and the DJPC. Please join us in making a difference and educating others on what we can do to make a better world possible for generations to come. 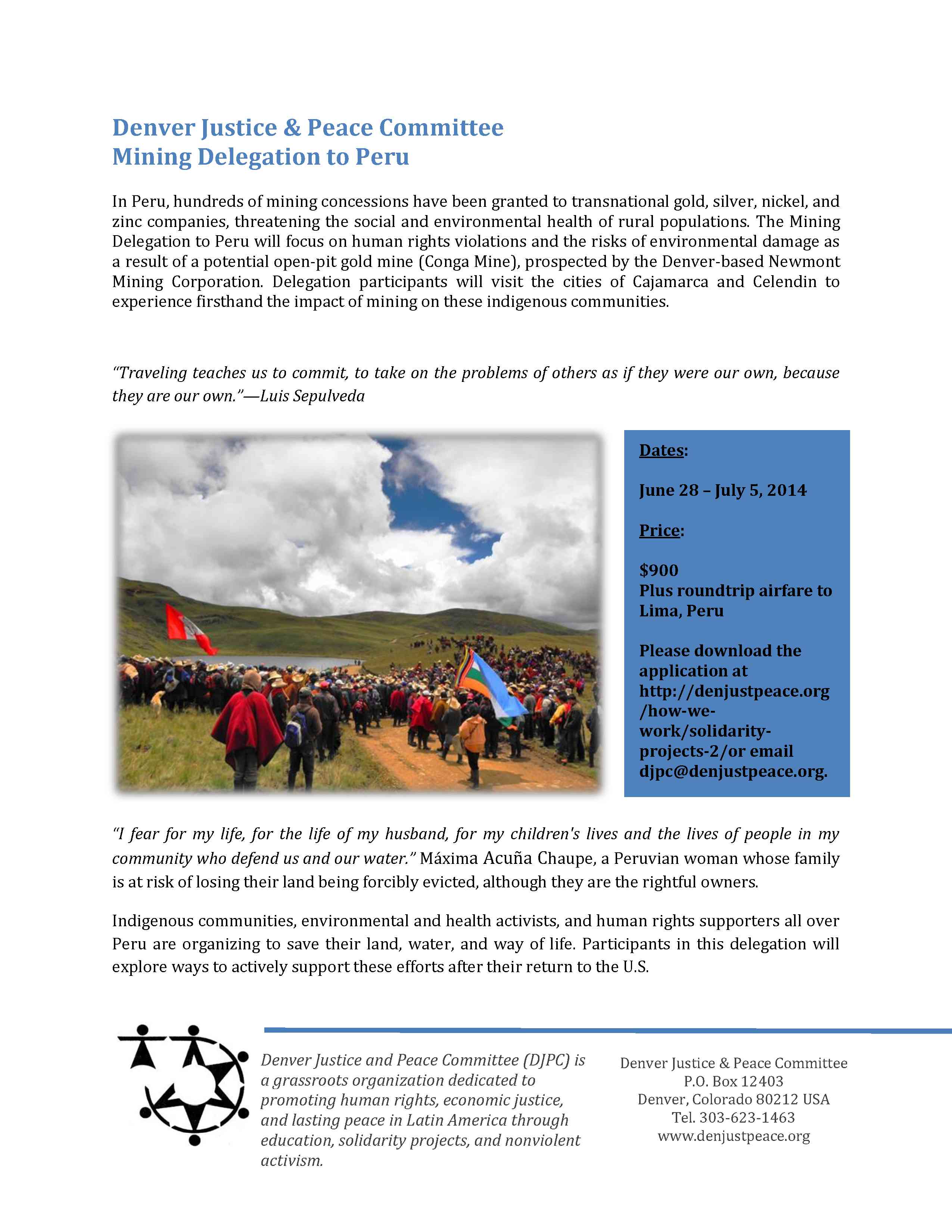 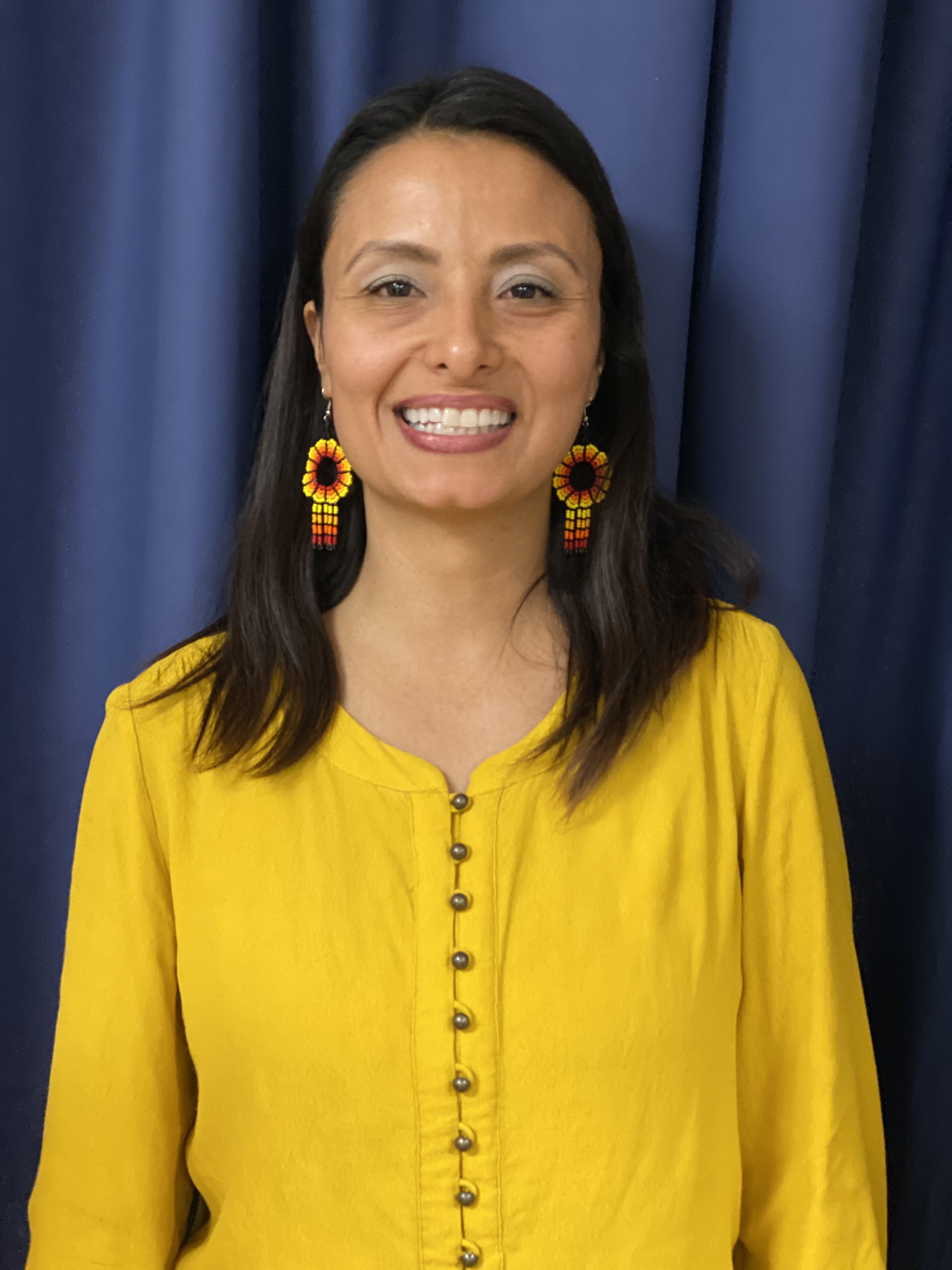 A message for Natasha Kerr our newest board member: Wishing you and your loved ones a happy New Year! 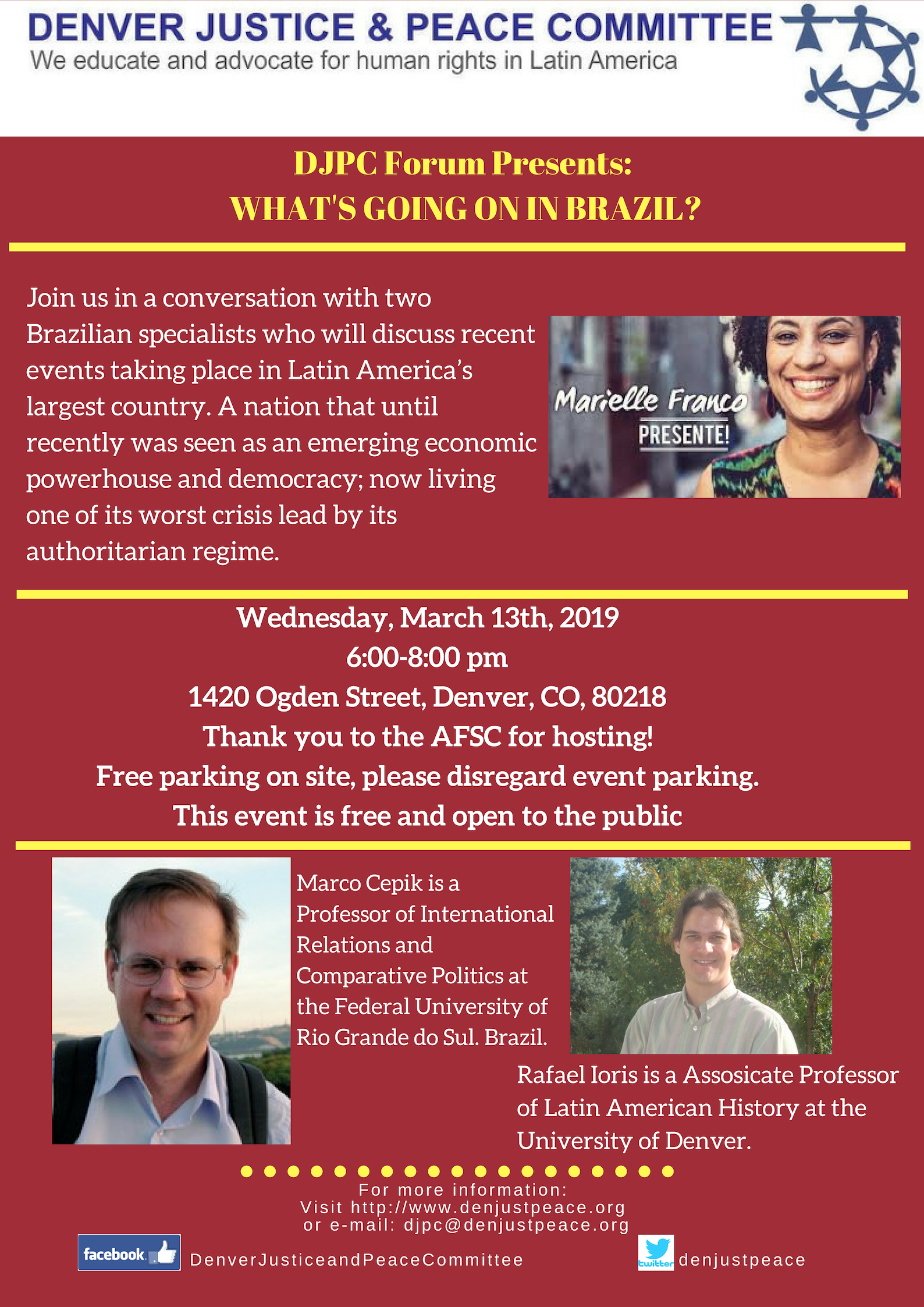 DJPC Forum Presents: What is going on in Brazil? Wednesday April 17th at 6pm