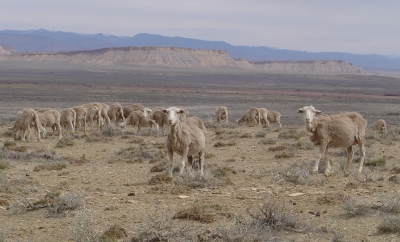 Professor Tom Acker teaches Spanish at Mesa State College and spoke about his experience interviewing and advocating for H2A Range Workers and their rights in Colorado. During his presentation, he spoke of the importance of having an inside connection with former H2A range worker, Mr. Ignacio Alvarado, who had experienced working conditions and knew where to find locations of sheep herders throughout the year. Professor Acker and Mr. Alvarado were able to keep a record of their interviews of various sheep herders with the help of Mr. Jacob Carpenter who filmed the events.

Through these interviews, they learned that if the herders get sick or injured on the job, some bosses tell them to go back to the ranch or are sent back to their home country instead of being taken to a hospital. One of the serious dangers these herders face are tick or other insect bites that become infected since herders can’t bathe often and are constantly around animals. Another problem is appropriate clothing and heating. Ranchers are obligated to provide food and shelter but often the clothing is not weather appropriate and the only source of heat is a wooden stove in the “campito.” These “campitos” can be dangerous since the stove is near the door and not all campitos have another exit, such as a window large enough to crawl out of. Campitos have to be approved by an inspector but they do not inspect every camper. Instead, they are usually shown one of the best campers a rancher owns and after it is approved, the inspector gives the rancher enough stickers for his other campers.

In addition to less than desirable working conditions, some herders have their documents taken from them so that they cannot leave, cannot see their contracts, are threatened by their bosses, do not have access to transportation and/or do not have cell phones for communication even for emergencies, and do not know how much they will be getting paid.

Though these conditions are bad, it is important to remember that not all ranchers operate this way. Some sheep herders are treated very nicely, with warm jackets and campers with solar panels. People and organizations that advocate for better working conditions do not want to harm the industry of local agriculture. They simply want to filter out abusive ranchers so that the H2A range workers are treated fairly and with decency.

The Action Step for this Salon was writing letters to the editor. There were two articles from the Denver Post that people could reply to. The first article is titled, “Peruvian sheepherders’ lawsuit alleges abuses by Craig ranch” and the second article is titled, “An Unfair Picture of Sheepherders,” and is written by Sharon O’Toole, a rancher. Gabriela Flora provided suggested responses as well as information about sending a letter to the editor of the Denver Post. Links to Word Documents containing this information and the full articles from the Denver Post can be found here: Action-LettertoEditor#1, Action-LettertoEditor#2.

Information on the work Colorado Legal Services has done to expose rangeworkers: “Overworked and Underpaid: H-2A herders in Colorado”

Youtube videos by Jacob Carpenter: Slavery in America: 90¢ an Hour & -20°F Below Zero , Back on the Range: A Return Trip to the Wage Slavery Sheep Camps , Back Country Blues: A Story of Worker Abuse in Colorado’s Wild Lands

Call for volunteers. Build for Peace on Saturday August 26th 2017