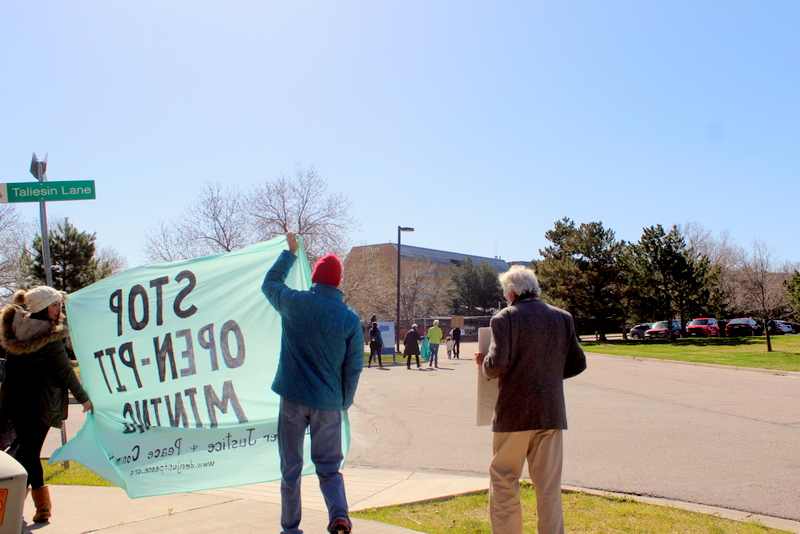 Denver residents protest the Newmont Shareholders’ meeting at the Hilton Inverness Hotel on Wednesday. (all photos: The Nation Report)

The Denver Justice and Peace Committee (DJPC) has years of experience fighting the mining practices of Newmont Mining.  So it wasn’t a surprise on Wednesday to see members of the social justice organization confronting Newmont’s shareholders at its annual meeting held at the Hilton Inverness Hotel in Centennial near Denver this year.

Despite at least five automobiles of police oversight on the protest, and being removed from the hotel grounds, the group still reached at least one shareholder, and passersby to the nearby intersection with the message:  Stop Open Pit Mining.

Newmont Mining has operated the Yanacocha Mine in Cajamarca, Peru since the 90s. Yanacocha is the second largest open-pit gold mine in the world and the largest mine in South America.  Newmont’s proposal for a second mine named Conga Mine has been put on hold among heavy international protest. (and here)

DJPC has met with Newmont corporate officials on several occasions bringing concerns about its operations and raising concerns about how, “through its operations, the company has contaminated the region’s waters and annihilated lakes creating an environment in which local residents have endured high rates of cancer and other health problems, crop damage, and animal deaths.”

The group found itself demonstrating after one such meeting in 2015 when members said they felt that Newmont was nodding its head yet remaining elusive.

Denverite Lynn Holland, member of the DJPC board demonstrated at the protest by holding a sign that read, “Clean H20, ” I’m out here to support the idea of clean water because that’s a basic right I think that you can have.  Our concern of course is that’s not what happens of course as a result of open pit mining which is what Newmont engages in its mines.  Peru is our main focal point right now.”

Holland toured the Newmont mining site in 2014 in Cajamarca and spoke to the people affected by the mining operation, “[Newmont] has caused an incredible amount of environmental destruction including contamination of the water with heavy metals, various kinds of chemicals that are used in the processing of the gold which they extract through the open pit strategy.”

The company lost its export permit from Indonesia in 2014 after the government banned mineral ore exports earlier in the year.  After new taxes on ore concentrates, the company stopped operations that were begun in 2000 in Batu Hijau.  Newmont eventually sold out last year.

Although the DJPC focuses resources to support the people of Latin America, the group released a statement on Monday in support of global mining resistance, “We stand in solidarity with the people around the world living near open-pit mines who suffer air and water pollution, and whose very lives are threatened by the criminalization of dissent.”

Some from DJPC have found themselves on location in Cajamarca talking to the people about their experience with the mining operation. 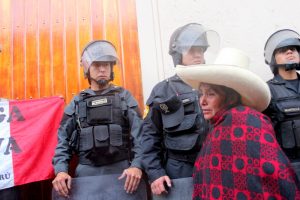 One high profile figure on the receiving end of the mining operation impacts isMaxima Acuña, 2016 Goldman Environmental Prize winner.  Aaron Schneider, a professor at the University of Denver attended the demonstration and explained that Acuña has been on the radar of locals since news of repression against her surfaced, “She is a poor campesina peasant woman in Peru, an Indigenous woman, leader in her community whose land is threatened by Newmont’s mining operations.  And she has refused to leave.  It’s her land, her family’s land.  And she has a connection to that land, and a desire to protect the environment.  And Newmont has engaged in various efforts to kick her off the land.”

One of those efforts happened in 2015 when  on February 3 Newmont’s Yanacocha security forces and 200 National Police arrived to the Acuña-Chaupe home as they have in the past, and destroyed a newly constructed portion of the mud brick home.  There were reports taken of Acuña-Chaupe’s son being beaten by security forces. “Newmont Mining is not above hiring thugs that use violence to intimidate people who won’t get out of their way who value the land and value the environment,” Schneider denounced, “And for Newmont it’s just a matter of money.  They’ll use any mechanism that they can and violence that they can deploy to get at the money they see in the land.  So they see no money in the land other than the money they can extract from it.”

In attempt to stave off this negative public image, Newmont maintains a public relations campaign to donate to communities in what watchdogs say is a pitiful contribution when compared to the company’s profit’s as Schneider explains, “Mining companies attempt to divide communities, create factions and divisions in communities by co-opting some parts of communities with gifts or promises or investments or schools or clinics or something like this.  I heard of one mining company that, I don’t know if it was Newmont, but it was in Honduras, but they were giving out backpacks of school supplies and assumed this was a way they would gain trust from the community, that they could dig up the community and destroy the land and the agriculture.  They were outraged when people in the community said it’s going to cost a lot more than a backpack full of school supplies to get us to give up our heritage and our connection to the environment.  This is typical of what mining companies attempt to do is infiltrate communities and divide them, to co-opt with meaningless giveaways that are nothing compared to the wealth that they intend to extract out of the land.” 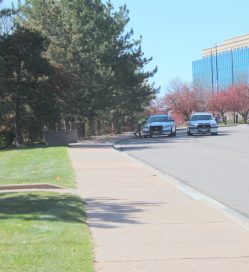 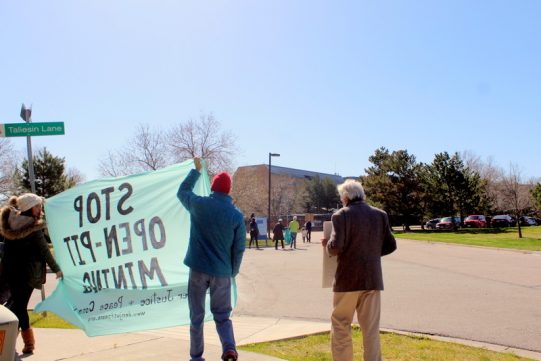 (English) In honor of the earth that sustains us all, Happy Earth Hour!

2 thoughts on “Newmont Mining Shareholders Confronted by Protesters. By thenationreport”