What is the NAFTA? 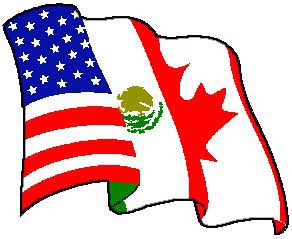 According to 1994’s twangy independent party presidential hopeful Ross Perot, it is “a giant sucking sound”. Eleven-years after its inception, the debate still continues; some argue that NAFTA has fashioned a dynamic partnership between diverse nations, created growth, and fostered job and investment opportunities for all; while others argue that NAFTA has increased income disparity, worsened environmental policy, exploited labor, and relaxed policy for foreign ownership over Mexican resources, land, banks, businesses and otherwise.

The North American Free Trade Agreement, the first trilateral trade agreement between Canada, Mexico, and the United States, has increased trade and investment between its members, but who has benefited—the average Mexican, U.S. citizen, or Canadian? Here are some of the agreement’s less palatable realities:

Since NAFTA’s inception all three signatories on the agreement have seen escalated income disparity, with Mexico experiencing the worst effects. The real wages for the majority of Mexicans are actually less than they were before NAFTA, with the top 10% of household seeing increases in income, while the bottom 90% of households have seen declines. Additionally, poverty rates in rural Mexico increased three percent in the first four years of the treaty.

This trade agreement encourages US firms to move factories into Mexico ; well-paid manufacturing jobs were/are outsourced at fractional wages, and they have not proven to raise the income for Mexican laborers. Mexico ‘s real wage for manufacturing jobs has actually decreased by 11% since NAFTA’s initiation. After NAFTA, 500,000 manufacturing jobs were added in Mexico, while 1.3 million agriculture jobs have been decimated because of the stipulations in NAFTA that support subsidies to US farmers. In the last few years, tens of thousands of manufacturing jobs have move to China , and will continue to move West and South as the other American free trade agreements pass, leaving empty factories and severe urban poverty behind.

Maquiladora employment increased over five-fold between 1984 and 2002. This light manufacturing industry allows for the harshest working conditions and is known for its violence toward its employees, particularly women. Maquiladoras are foreign owned factories in “international free trade zones”, where companies operate duty free and with little labor or environmental regulation. These export zones employ labor at minimum pay levels and usually move to another country when workers begin to organize for better treatment.

In the year 2003 alone, 400 people were found dead at the northern border trying to cross into the United States compared to the 80 people killed crossing the Berlin Wall in all of its 28 year existence. Mexico ‘s loss of agricultural jobs has resulted in unemployed Mexican farmers migrating to the US in search of work. Paradoxically, when looking through the free trade agreement, unlike the European Union, there is nothing mentioned about free movement of labor—only goods and capital.

Until NAFTA, the small Chiapan municipality of Comalapa consisted of over 52,000 people, and farming on community ejidos was its staple job provider. After opening the trade markets, heavily subsidized US imported corn underbid Mexican corn, to which the state of Chiapas devotes 65% of its land. Today the desolate region is scattered with only some women, children and elderly. The “Gringo Coyote Company”, the equivalent of a transnational human cargo company between Mexico and the US has gobbled up the Comalapa labor force.

Meanwhile, Comalapa recently opened a post office, two banks and 30 foreign exchange offices in order to exchange part of the 6.75 billion dollars that is sent to Mexico from the migrants in the US each year. As of 2004, remittances from US based Mexican nationals are the second largest source of income in Mexico , increasingly gaining on oil revenues.

Despite the title, NAFTA’s primarily concern is not free trade, but rather investment. When looking through the fine print, NAFTA above all codifies investment, telecommunications, competition, and financial rules. At the present, only one of Mexico ‘s banks has not been sold to foreign banks. Also unlike the European Union, NAFTA has no provisions about a common currency or common economic regulations, although there are numerous provisions on intellectual property rights, investment rights, and company compensation rights.

According to Joseph Stiglitz, the former chief economist at the World Bank and Nobel Prize winner, “hidden in Nafta was a new set of rights – for business – that potentially weaken democracy throughout North America”. New flexible investment laws now allow foreign investors to sue governments, costing tax paying citizens the burden of pricey lawsuits. Thus far, US$13 billion dollars in lawsuits have been filed against governments because of NAFTA.

Although NAFTA never quite “sucked” all the jobs out of the United States, it has fashioned an unprecedented mark on the way international business is done. This legal compact between the United States, Mexico, and Canada has shaped, and continues to shape, most bilateral and multilateral trade and investment agreements in the world since its ratification in 1994. NAFTA becomes the most pivotal international body of law passed since the creation of the World Bank, the International Monetary Fund, and the World Trade Organization/General Agreement on Trade and Tariffs after WWII in 1944.