What is the Central American Free Trade Agreement? 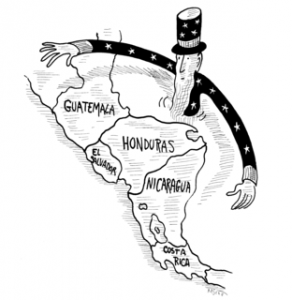 The US-Central American Free Trade Agreement (CAFTA) is a complex international treaty, modeled after the North American Free Trade Agreement (NAFTA); it is the second installment towards a Free Trade Area of the Americas Agreement (FTAA), which will encompass the 34 American countries (with the exclusion of Cuba ). This comprehensive body of international law neatly packaged simply as CAFTA sets the paradigm for trade, investment, labor, environment, state, civil, and corporate relations for the twenty-first century between the United States, most of Central America and the Dominican Republic. If approved it would take legal precedence over current legislation in all participating countries.

Unlike NAFTA’s seven-year negotiation process, CAFTA was crafted under the auspices of the Trade Promotion Authority commonly known as “Fast Tracks” which limits congressional discussion and prohibits congressional amendments thereby allowing the Bush administration to push through Free Trade Agreements (FTAs) relatively swiftly. Negotiated primarily by multilateral lending institutions and transnational corporations, this FTA excluded the participation from the very communities most deeply affected by the treaty itself.

CAFTA will serve as a major catalyst to the FTAA. It is a strategic piece in shifting the current process of international commerce. At the same time, with the FTAA talks stalled, if the US Congress blocks CAFTA’s passage, it would bare the deep faults of current free trade legislation. CAFTA’s current precarious position in the US Congress provides Latin America a better bargaining chip with the United States to negotiate more provisions beneficial to less industrialized countries. If it is passed, the United States will monopolize trade negotiation power within Latin America, and a devastating blow would be delivered to the anti-globalization protests.

This Washington driven agreement forestalls harsh realities for the international community. Under the euphemisms of “free trade” and “trade liberalization”, this paternal legislation will outsource jobs in the US, cripple the agriculture industry, increase violence toward women, increase immigration to the United States, devastate the environment, privatize basic public services, restrict access to affordable medicine and expand investor rights over human and environmental rights.

The agriculture industry
Neither Central American farmers nor US family farmers benefit from CAFTA, lobbied and lawyered-up multinational agribusiness cartels come out on top. Central American campesinos (peasant farmers) with substandard machinery and without distribution channels cannot compete against the heavily subsidized North American farming conglomerates with their advanced farming technology and easy access to markets. The increase in Mexico’s rural poverty exemplifies how campesinos were negatively impacted by NAFTA. In 2003′ Cancun round, the FTAA talks came to a hammering halt because of the US’s inflexibility on reducing their agriculture subsidies.

Violence toward women
The loss of subsistence farming, and the economic imbalance this creates, ultimately thrusts women to into the maquila sector in order to feed their children. This sector has a chronic reputation for extremely low wages and abrupt relocations; additionally workers must face physical, verbal and sexual abuse as well as age discrimination and job instability.

Migration to the United States
Like with NAFTA, the treaty will escalate poverty in Central American countries leaving rural workers no option but to migrate because of little or no farm work.

The environment
Central American rainforests house some of greatest biodiversity in the world. Although many argue it is cosmetic and easy to circumvent, Chapter 17 in CAFTA includes text regarding environmental protection. Unfortunately, the chapter is capricious and difficult to enforce. Article 2 of the chapter simply implies that the government’s current environmental standards need to be maintained. If CAFTA is passed, it will need the electric and transport infrastructure to support the industrial and transportation corridors. The Plan-Puebla Panama (PPP) assembles this infrastructure. Cunningly, dams are being financed separately as independent projects in order to distance CAFTA and the PPP from political backlash.

Intellectual property
If CAFTA is approved, it will bind US-Central American intellectual property (IP) laws and affordable generic medicines will become illegal in Central American countries where access to lower cost healthcare is so necessary because of US pharmaceutical patents. Conjointly, under harmonized IP law, CAFTA will yield the control of seed stocks to a handful of companies, denying Central American farmers from reusing seeds into the next harvest. Now large agriculture corporations splice terminating genes into plant DNA that prohibits plants from producing seeds on their own. Also regarding IP laws, CAFTA further enables bio-piracy, where giant pharmaceutical companies patent indigenous herbs.

Investor, corporate, human and environmental rights
The agreement’s primary concern is to liberalize foreign investment barriers. In addition to allowing corporations to abuse intellectual property, the agreement gives equal treatment to foreign investors as to local investors. The treaty would abrogate current Performance Requirements laws that allow governments to require foreign investors to hire locals and purchase local supplies. In addition, CAFTA allows corporations to sue governments for damages of “lost profits”. If civilians protest the privatization of public services (which happens quite often in Central America), then corporations can sue the government.

Basic public services
When public utilities privatize, it has detrimental effects on the poor. After privatizing essential services, the price for the water, electricity and healthcare would become unaffordable to the neediest.

What can be done?
Free trade between countries can have profound effects on growth and deceasing poverty, but CAFTA is more than just a law reducing trade barriers; it is a complex institution of investment, trade, and intellectual property law, defining transnational business and how it interacts with (or acts upon) the inhabitants within its borders. Trade agreements can, and should, shape how states, civilians, and corporations relate to each other. They provide a forum to discuss, not only corporate and investment rights, but human and environmental rights as well. As US citizens we should take advantage of democratic freedoms and pressure our government to use trade agreements to leverage a more just world.

In early 2005, Congress is going to vote on the ratification of the Central American Free Trade Agreement. It is imperative (even more so now considering the outcome of the last elections) to educate our Senate and House Representatives on the negative realities that accompany this bill and have this treaty overturned. Please contact your congresspersons by phone, fax, mail, e-mail, and/or in person. If you are unaware who your representative is, please refer to http://www.house.gov/ .

Committee in Solidarity with the people of El Salvador, www.cispes.org/cafta/

Resoure Center of the Americas, http://www.americas.org/News/Features/200303_MarApr_NoGuerra/200303_CAFTA_Weiss.htm