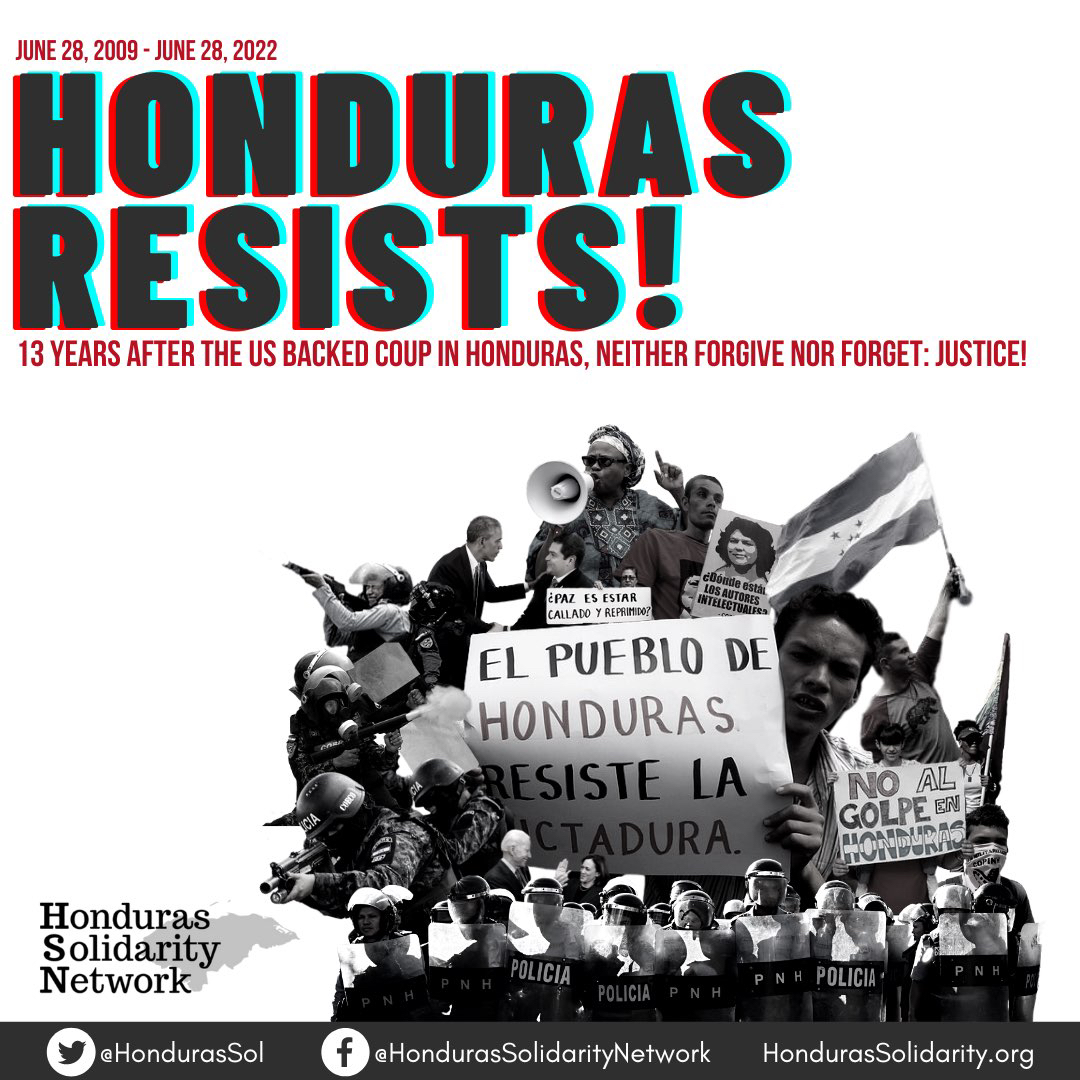 June 28, 2009 – June 28, 2022
Solidarity with Honduras 13 years later
Another anniversary of the June 28, 2009 coup d’etat that changed Honduras forever is here. This year, on this date, the Honduras Solidarity Network of North America (HSN) not only reaffirms continuing solidarity with the Honduran social movements and opposition to the US policies in the region that continue destructive interventionism and interference, but we also join the commemorations of struggle and celebration by the Honduran people of their victory in electing a government born out of the blood, sweat, and tears of years of resistance. This victory opens up a bigger space for the people and their movements to continue fighting for the re-foundation of their country. Still, they face powerful enemies and obstacles in their path.

June 28, 2009
On this day a public referendum was set to take place for the people to vote on adding a referendum to the scheduled national elections in November 2009 that would decide whether to convene a constituent assembly to reform the constitution. This referendum, on top of the numerous progressive reforms in Honduras and its increasingly warm relations with the ALBA nations, including Venezuela, put in place by then-president Manuel Zelaya Rosales, brought on the fury of the Honduran right-wing oligarchs. At dawn on the 28th, Honduran military units stormed the presidential residence. They kidnapped President Zelaya putting him on an airplane that, after stopping at the US military base (Palmerola), flew to Costa Rica and left him on the tarmac.

The reaction from the Honduran people was outraged and immediate. Hundreds, then thousands, poured into the streets. Across the rural areas, campesino and indigenous communities blocked the highways. These protests were met with violent repression but continued to grow. There were hundreds of injuries and arrests, and security forces killed some protesters in the first few weeks, but resistance continued. There was also a quick response from solidarity and human rights organizations in the US and Canada. Groups, including many organizations that joined together not long afterward to found the HSN, rushed observers toHonduras. In the US, they organized protests and pressured the Obama administration to stop support for the coup.

While the Honduran people began organizing for long-term resistance, the US settled into long-term backing for the coup dictatorship. The US supported and benefited from the years of aggressive and violent neoliberalism that would increase the extractive economy based on mining and hydroelectric projects, further land grabbing by the agro-industry companies and oligarchs, and ensure subservience to US foreign policy and wars. This led to the near-collapse of the privatized and plundered public education and public health systems, murders by death-squad groups and security forces of activists across the country, and a terrible increase in poverty, crime, and general violence. The eight years (2014-2022) of the narco-dictator Juan Orlando Hernandez (JOH) were also marked by the forced displacement of millions of Hondurans internally and hundreds of thousands forced to leave Honduras altogether.

June 28, 2022
The election in November 2021 and inauguration in January 2022 of President Xiomara Castro of the Liberty and Refoundation (LIBRE) Party in coalition with smaller opposition parties is the victory of 13 years of resistance by the Honduran people. During the first five months of the new government, many important promises have been kept and progress made, but the obstacles to reforms- let alone deeper changes- are enormous. The narco-dictatorship economic and political structures are deeply entrenched, including having representation in Congress and among the government civil service employees. The judges at all levels of the court system are still those appointed by Juan Orlando Hernandez. Xiomara Castro inherited a country that is nearly bankrupt and in debt, facing forces that oppose change.

The United States and Canadian governments and international financial institutions are among the forces against “too much” change. The US seems to have realized that the JOH narco-dictatorship had become too exposed and untenable and that the opposition to JOH in Honduras had grown too broad to directly challenge. It recognized that Xiomara Castro won the election and sent Vice President Kamala Harris to the inauguration. From day one, it has also pressured the new government to limit its independence from US internationalinterests and even to limit its plan to dismantle the neoliberal and extractive economic model.

The Honduran social movements: the organizations of the Indigenous and Black peoples, small farmers, workers, women, and students, are supporting their new government while continuing to fight for their proposals and the promise of refoundation in Honduras. As international solidarity and human rights organizations in the US and Canada – we continue to stand with the social movements. We continue to tell our governments and corporations to stop interfering, to stop using money and a military presence to control and limit Honduras’ progress in undoing the damage of the past 13 years.

Follow the Honduras Solidarity Network on Facebook and Twitter @hondurassol. We are working on a campaign to support debt relief for Honduras that is urgently needed for the project of rebuilding and refounding the country after 13 years of disaster. We are also a part of the “Justice for Berta” campaign led by COPINH, which is fighting to ensure that all those involved in her assassination are brought to justice. To sign up for our informational
list serve email us at honsolnetwork@gmail.com 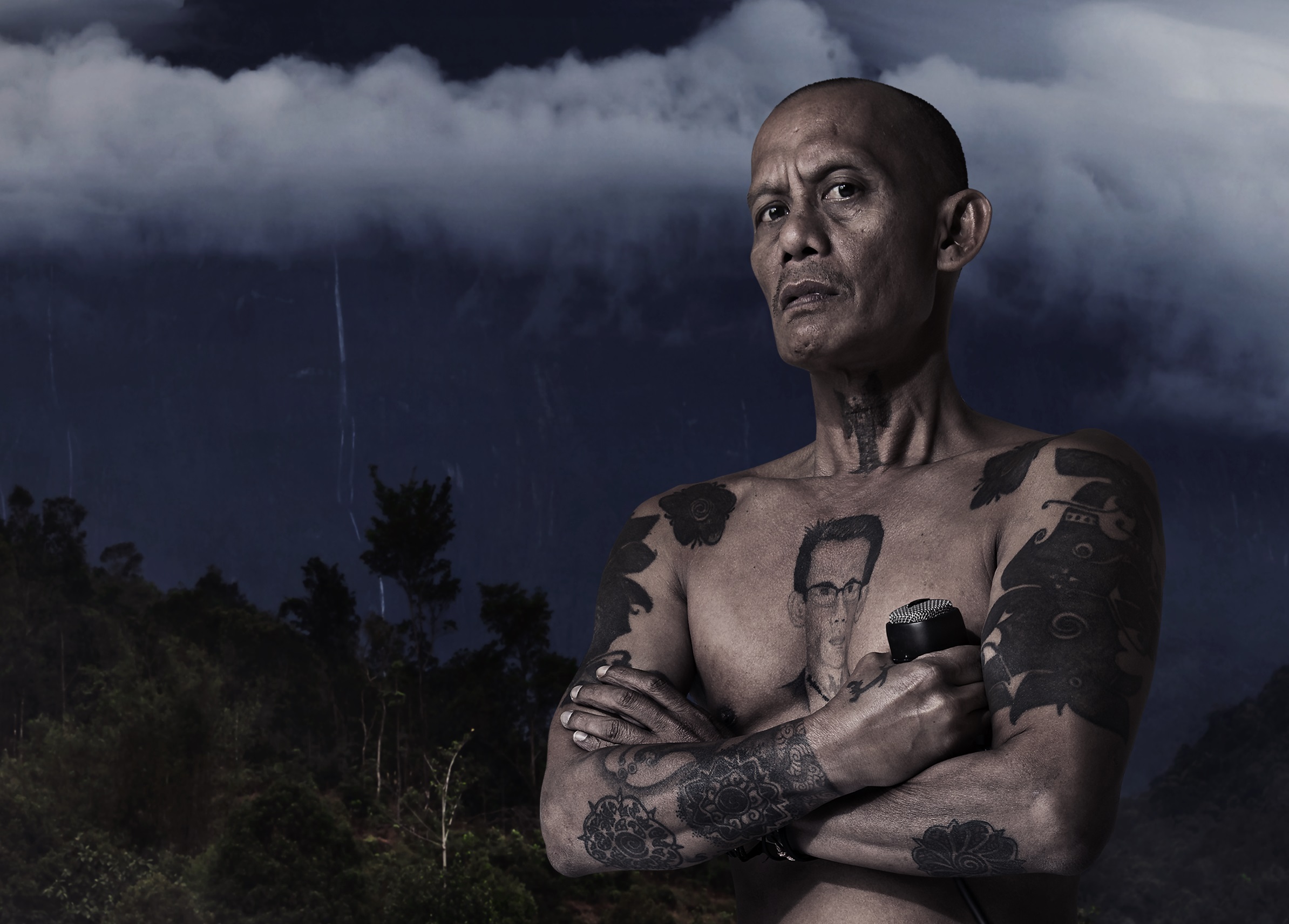