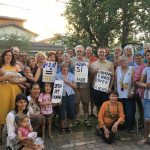 Throughout the world, open-pit and other high-tech mining technologies are producing chemical waste that contaminates water supplies, degrades the natural environment, and destroys the possibility of farming and fishing for a living. Deforestation and the use of dynamite obliterate old growth forests and the ecosystems they support and ultimately undermine the means of subsistence and community life for indigenous and other rural communities.

On Sunday, July 22, Global Day of Action Against Open-Pit Mining, the Denver Justice and Peace Committee (DJPC) joins with others around the world in opposing the devastating social and environmental impacts of open pit mining.

The DJPC will continue to demand an end to the proposed expansion of the Yanacocha Conga Mine and to all open pit and other environmentally hazardous mining practices.