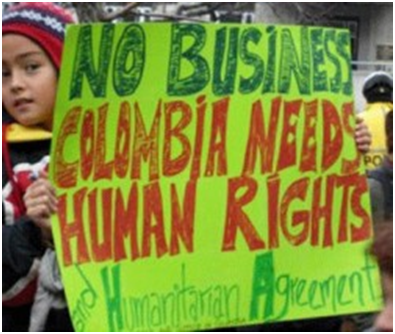 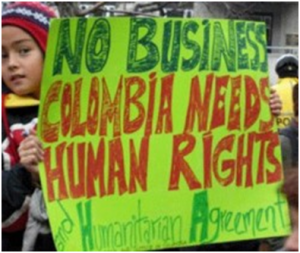 The Denver Justice and Peace Committee stands firm in its opposition to free trade agreements that are the means to expand economic systems that benefit U.S. and transnational corporations’ interests at the expense of local communities, economies, and ecosystems.  Unfortunately, the Obama administration has placed a priority on passing two such agreements that were written during George W. Bush’s administration.  The Colombia and Panama Free Trade Agreements are not only harmful to the people of those countries, but they are not the solution to America’s economic woes. We ask you to join us in asking our representatives in Congress not to pass them.

DJPC opposes the trade pact with Colombia because we are concerned that the agreement would result in the displacement of impoverished farmers and the destruction of the environment by timber, mining, and palm oil interests that will be given incentives under the pact.  We also feel that the agreement does not do enough to hold the Colombian government accountable for prosecuting the murders of union workers as well as other human rights violations.  The Denver Justice and Peace Committee also opposes the Panama Free Trade Agreement because it does nothing to stop the problem of corporations using Panama as a tax-haven as well as the prevalence of drug money laundering in that country.  There are also human rights violations in Panama, especially those directed against indigenous peoples, that the pact does not address.

Unfortunately, President Obama has made it clear that he supports both pacts.  In his recent jobs speech to Congress, he said, “I want to see more products sold around the world stamped with the three proud words: ‘Made in America.'”  DJPC urges you to contact your representatives and let them know that you are not proud of those three words if they stand for environmental destruction, drug-money laundering, and the displacement of and violence against workers in Latin America. Tell them that these agreements will lead to an estimated loss of 55,000 U.S. jobs and that they will create more problems, such as poverty and displacement, in Colombia and Panama.

Below, you will find a Scorecard on Latin American Trade that shows how the Colorado delegation has voted on trade issues in the past.  The chart includes the Andean Trade Preference Act Extension from 2007, the CAFTA vote from 2005, the United States-Peru Trade Agreement from 2007, and the vote to postpone the consideration of the Colombia Free Trade Agreement from early 2008.  As you can see, both Representatives DeGette and Perlmutter voted to postpone the Colombia Free Trade Agreement.  They need to know that their constituents support the decision not to pass it then and demand that they defeat the two pacts once and for all now.

A vote on these two agreements is highly likely now that Congress is back in session and so it is imperative that you take action soon.  A general phone number to reach any member of Congress is 202-224-3121.  This number will connect you with the U.S. Capitol Switchboard and you can then ask for your Representative’s office.

Here are the phone numbers for the Washington D.C. offices of the Colorado Senators and three Representatives:

When you are connected to your representative’s office, ask to speak to the Trade Legislative Aid.  If that person is unavailable, leave a message expression your opposition to the trade agreements.

Here is a sample script:

a.  Hello, my name is ______and I am a constituent.  May I speak with the Trade Legislative Assistant?

c.  It is projected to increase our trade deficit and cost more U.S. jobs (see additional talking points attached below).

d.  Does he/she oppose these trade deals?  Will he/she vote NO to help stop it?

The Denver Justice and Peace Committee firmly believes that the passage of the Colombia and Panama Free Trade Agreements will be detrimental to the people of both countries.  Please call your representatives today!

DJPC calls for an end to aggressive US intervention in Venezuela including an end to economic sanctions.

One thought on “ALERT: CONGRESS VOTES TODAY! Stop the Colombia and Panama FTAs!”