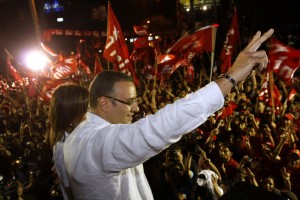 The significance of Mauricio Funes’ election as president of El Salvador on March 15, 2009 cannot be overstated. His victory is not just a break—it is the break—with a history of exclusive rule by conquerors and oligarchs. As a result, the stakes are high for Funes and his party, the FMLN.

Funes ran on a party platform that pledged his government would: lower the cost of living and increase purchasing power; create more and better jobs with special opportunity for youth and women; defeat crime and increase family security; direct concentrated support to poor rural and urban families; and defend and support families in El Salvador whose primary wage earner has migrated. The platform calls for increasing the availability of and access to employment, housing, health, education, and safety so that all Salvadorans can live dignified, productive and happy lives in El Salvador.

Funes, who will assume office on June 1st, has his work cut out for him. These are ambitious goals for a number of reasons. Funes does not bear the traditional FMLN credentials, i.e. he was not a guerrilla during the civil war. So, he has to develop trust and cooperation within his own party. He must do the same with parties of the right who together have the votes to block legislation. The FMLN holds the greatest number of seats in the Legislature but not a majority. As the party platform indicates, the problems facing El Salvador are monumental. Additionally, the country has never adequately dealt with the legacy of war. Until it comes to terms with the root causes of its social and economic ills, which went unresolved despite 12 years of combat, making meaningful progress will be a formidable task.

Despite outgoing President Saca’s assurances two weeks prior to the election that public finances were stable and that “there is nothing to worry about,” there is a lot to worry about. The global crisis has significantly affected El Salvador. Exports and tax revenues are down, job loss has risen over the last eight months, and remittances are projected to drop by 13% in 2009. Fitch, Inc., the financial risk rating agency, has stated that El Salvador and the new Funes government will confront a “disproportionate impact” from the global economic crisis.

In the face of all these challenges, hope lies in the fact that Mauricio Funes is an intelligent, capable leader in whom the Salvadoran people have put their trust. He did not win on FMLN votes alone and people are willing to give him a chance. He is known as a pragmatist so will lead from a position closer to center than other FMLN candidates might have. He was painted as a pawn of Cuba and Venezuela during the campaign, but his professional history and comportment during and after the election show that he is very much his own person. It will be an uphill struggle, but with Funes’ tenacity, El Salvador does have a future.

Who stands to benefit from a Green New Deal? What’s at stake?